May 2017
Congratulations to one of our graduate students, Kristen Morrow, who won one of the top prizes at the CSU wide Student Research Symposium! 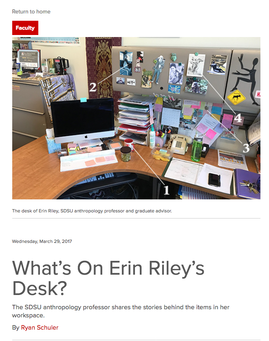 http://newscenter.sdsu.edu/sdsu_newscenter/news_story.aspx?sid=76664
March 2017
Our very own, Dr. Casey Roulette, was awarded the Leigh Minturn Memorial Award for Early Career Cross-Cultural Research by the Society for Cross-Cultural Research (SCCR). The SCCR is a multi-disciplinary organization devoted to cross-cultural and comparative research. Leigh Minturn was a long-term leader, and former president, of the SCCR, who passed away in 1999. The award was given to Dr. Roulette for outstanding culture-related scholarly productivity and potential. Dr. Roulette’s research contributes to our understanding of human behavior at the nexus of plant use, infectious diseases, and human life history. His main interests include evolutionary and cross-cultural perspectives of recreational drug use, and he has conducted research among Congo Basin hunter-gatherers and east African agro-pastoralists.

Along with nine other students, Kristen will represent SDSU at the CSU-wide Student Research Symposium competition in April 2017.

Provost's Award for Best Poster Presentation
Joshua Trinidad – Undergraduate, Biology, Emphasis on Zoology: Roadside monkeys: The impact of provisioning on moor macaque (Macaca maura) ranging patterns in Bantimurung‐Bulusaraung National Park, Sulawesi, Indonesia
Mentor: Erin Riley (Anthropology)
February 2017
Our own Dr. Casey Roulette is featured in the the fourth episode of a podcast series called "The Mist: Drugs, Cults, and Cultures,” by Nate John. The episode is titled, “The Next Level: Performance Enhancers,” and it is largely motivated by interviews conducted with Dr. Roulette. In this episode, Nate compares university students’ use of “study drugs” to drug use among two sub-Saharan Africa populations: Aka foragers of the Congo Basin and Maasai agropastoralists of Northern Tanzania. All three groups use psychoactive drugs to enhance their performance within culturally and ecologically important domains, such as studying (students), hunting (foragers), and warfare/raiding (pastoralists).  Check it out via the links below!